Valentine Mishaps: A Twist with Words 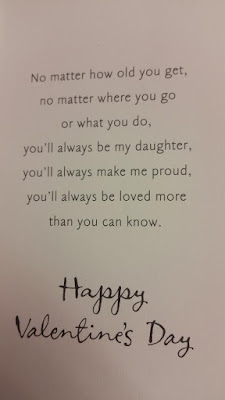 Hallmark tells us to send a card to show we care. So, many of us do.

A week ago, a learner came in excited about Valentine's Day. The learner told me that he'd never given anyone a Valentine card before. This year, he was sending a card to someone special - a young woman that he was getting to know and wanted to let her know that he liked her.

This young man planned it out. He showed me the gift - a lovely necklace and earring set. He had a container to ship them in. He had the woman's mailing address. He was psyched.

That evening, we brainstormed the personal note he wanted to include with the card and gift. The learner then went on to write his Valentine note with help from a tutor. He left the center early that evening to buy his Valentine's Day card.

Two nights later the learner showed me the card he had selected. I asked him to read the card to me. The card is pictured above - please take a moment to read it. Really read it.

Do you see the fourth line? Do you see the words "my daughter?" He read "daughter" as "dear?" He thought the card was for a sweetheart, not a daughter.

How would you feel if you found out the card
you picked turned out to be for the wrong person?

What would you have done?

What I did was discuss the message of the card versus the message the learner wanted to send. Then, we brainstormed what words he wanted the next card to say so that he could pick a more appropriate card.

I didn't see the card that was sent this week. The learner got his roommate involved, instead. However, you should have seen the twinkle in this learner's eye as he reported to me that he had sent out his Valentine package.

I hope the recipient is as happy with the gift, the card, and the personal note as this learner is.